What makes the Burj Khalifa stable

Gigantic skyscrapers are being built out of the ground in the metropolises. They are considered a symbol of a city and often represent a symbol of power and strength. The tallest building in the world, the Burj Khalifa, currently measures over 800 meters and will soon lose its rank. Here you can read how it was built and which skyscrapers will be built in the near future.

“Behind every skyscraper there is a personality who tries to make a bold statement. In principle, the construction of very tall buildings is associated with the emergence of new global cities. Cities like Dubai, Taipei, Shenzen and Guangzhou were almost unknown until they attracted attention with the construction of skyscrapers. "

At 829 meters, the Burj Khalifa is currently the tallest building in the world. The construction of the skyscraper took only six years (2004-2010), devoured 1.5 billion euros and consumed a total of 330,000 cubic meters of concrete as well as steel and other materials.

The 163 usable floors contain offices, apartments, fitness and wellness areas, a mosque, hotel rooms and a restaurant. 54 high-performance elevators from Otis, which travel at up to 65 kilometers per hour, ensure fast transport. If you want to go all the way to the top, you have to change trains. In the case of a continuous elevator, the ropes would be too heavy and could also swing against the walls of the elevator shaft.

The concept for the building was developed by the architects SOM. Structural engineers Bill Baker and architect Adrian Smith used a novel process that they developed and that is based on a Y-shaped floor plan with three building pillars. The columns support each other by being brought together in the central axis, like a wind turbine. If the wind blows against one of the supports, the one behind it remains unloaded and thus stabilizes the high-rise. This construction not only made the building very wind-stable and light, it also allowed more light to enter the skyscraper.

The team of architects chose a round shape for the structure of the skyscraper so that the desert wind Shamal, blowing at speeds of up to 200 km / h, has little surface to attack. 26 terraces weaken and additionally divert the wind. Reinforcements in the lower floors also make the tower extremely torsion-resistant.

800 concrete piles, which were rammed up to 50 meters deep into the sand by Bauer Spezialtiefbau and connected with a 7000 square meter concrete slab to form a stable foundation, ensure a firm footing.

In order to be able to transport the special concrete quickly to lofty heights, Putzmeister AG developed its own pipe conveyor system with special pipe guides for easy replacement of damaged pipes and three high-performance pumps. In just one hour, around 30 cubic meters of concrete can be pressed to a height of 600 meters.

The special formulation of the concrete not only has four times the compressive strength of normal concrete, but also sets after two hours. In addition, it took 20 chemical additives to keep the concrete pumpable and flowable. In order for the concrete to get into the formwork at outside temperatures of 50 degrees Celsius in summer with a maximum of 30 degrees, it had to be cooled with ice. The formwork solution supplied by Doka also required a high degree of adaptability to the shape of the tower, which is modeled on an Arab desert flower.

For the assembly of the aluminum facade, world market leader Halfen supplied fastening rails for the facade elements, which can withstand enormous loads. They could be latched quickly and precisely without drilling and were already concreted in during construction.

But the hunt for records is far from over. It still has to go higher: Emaar Properties, the builder of the Burj Khalifa, has been building a new skyscraper in Dubai since October 2016, which will exceed the Burj Khalifa in height. Another, even taller, mammoth building is being built under the direction of architect Adrian Smith in Jeddah, Saudi Arabia. And this too will probably not remain the tallest building in the world for long. Because in Basra, Iraq and Tokyo, superlative skyscrapers are to be built that will break the 1,000 meter mark. 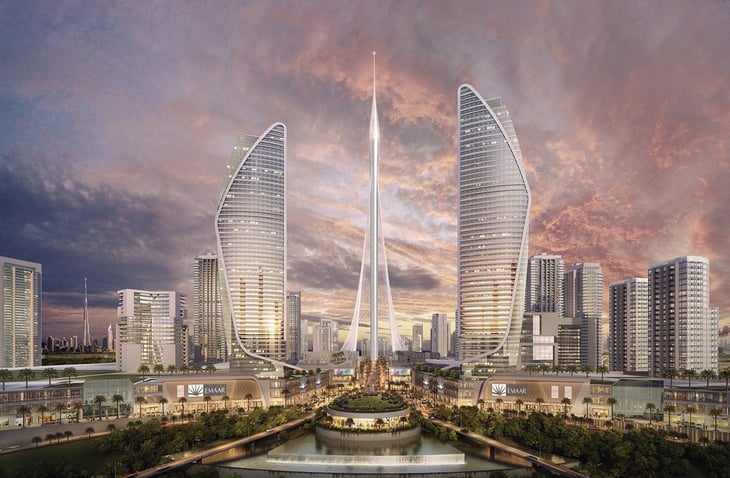 A futuristic observation tower with rotating glass balconies and gardens on several levels, luxury residences and restaurants is currently being built on Dubai Creek. An event center, a shopping center and a museum are to be built on the lower floors of “The Tower”.

The Dubai Creek Tower was designed based on the Hanging Gardens of Babylon by the Spanish-Swiss architect Santiago Calatrava. “The design is inspired by Islamic tradition and is reminiscent of the same story that the Alhambra and the Cordoba Mosque brought to the world. These architectural wonders combine elegance and beauty with math and geometry, ”said architect Calatrava. The building is to become the landmark of the technically upgraded Dubai Creek Harbor district, which, as a huge urban development project and intelligence center, will primarily deal with developments in the field of artificial intelligence.

“The Tower at Dubai Creek Harbor reflects the vision of Sheikh Mohammed bin Rashid Al Maktoum to establish Dubai as a global hub for business and leisure that attracts visitors from across the world. With this iconic development, Dubai is once again demonstrating its ability to develop first-of-its-kind projects that surprise the world. " Abdulla Al Habbai, Chairman Dubai Holding

The exact amount is not yet known. However, it is assumed to be at least 928 meters, which means that the Dubai Creek Tower would exceed the Burj Khalifa by 100 meters. The estimated cost is $ 1 billion. Completion is planned for 2020, in time for the Expo trade fair in Dubai in 2020.

However, that will probably not be enough for the title of “tallest building in the world”. The Kingdom Tower, which is more than a kilometer high and is due to open in 2019, is currently being built in the Saudi Arabian town of Jeddah. 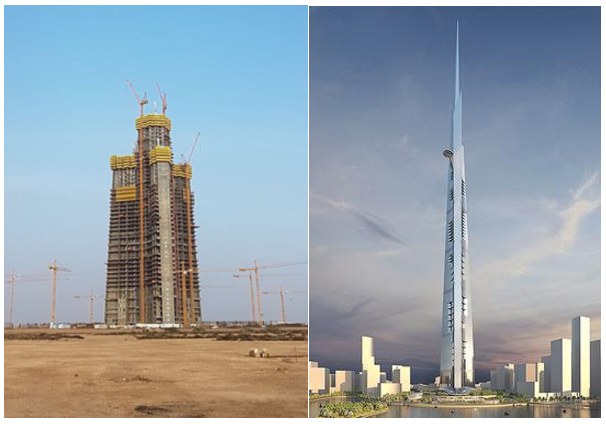 In the $ 1.2 billion Kingdom Tower in Jeddah, Saudi Arabia, offices, 481 apartments and a 200-room hotel are being built on a total of 500,000 square meters. The spiral-shaped, needle-like skyscraper was originally supposed to reach a height of up to 1,600 meters. Due to the nature of the ground, however, the planned height was reduced to 1,007 meters, although the final height has not yet been communicated.

Architect Adrian Smith, who also designed the Burj Khalifa, was commissioned by the Kingdom Holding Company, a company belonging to the Saudi royal family. As with the Burj Khalifa, the tower's floor plan is based on the shape of a Y-shaped rail. The building was anchored with a total of 270 piles that reach between 45 and 110 meters in depth.

The Jeddah Tower is the centerpiece and the first phase of the $ 20 billion construction projectJeddah Economic City which is being built along the Red Sea in northern Jeddah. The highest viewing platform in the world is to be located at a height of 652 meters. Completion was originally planned for 2018, but is expected to take until the end of 2019.

The city is nicknamed "The Bride of the Gulf", hence the name "The Bride" for the city of the city and the planned tower. This project is not just about the tower, however. The entire city center is to be redesigned and upgraded by the British-Iraqi architects AMBS. “The Bride” should be more than a single building - a complex of four towers with heights of up to 964 meters, which are connected by gardens and squares, is planned.

Hotels, offices, apartments, convention centers, shops, parks and even a railway network of their own will find space on a floor space of 1.55 million square meters. The planners therefore speak of a "vertical city", an entire city that towers into the sky. It has not yet been published when construction will start. 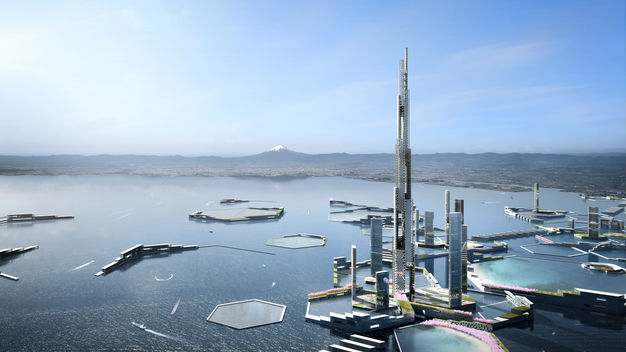 The hexagonal Sky Mile Tower in Tokyo Bay is still a dream of the future. At 1,600 meters, it will be twice as high as the record holder Burj Khalifa. It is to house 15 high-rise apartment buildings, which stretch up to 460 meters high into the sky and can accommodate 55,000 people. There are also restaurants, hotels, shopping malls and hospitals.

The “Next Tokyo District” was designed by the offices of Kohn Pedersen Fox Associates (KPF) and Leslie E. Roberson Associates (Lera) and is designed as an artificial archipelago with the mega tower in the middle. It covers an area of ​​12.5 square kilometers and is designed for 500,000 people. Hexagonal rings and angled structures in the water serve as fresh water reservoirs, harbors and algae farms and break giant waves. According to KPF, however, there are currently no plans to implement the vision, only the necessary technologies are being researched further.

Conclusion: the tallest buildings in the world

There is currently no end in sight to the boom. Architecturally, however, the Höhenrausch is controversial. Critics warn of investment ruins. Buildings of this type are like small towns for which there are no proven solutions. And who wants to live at an altitude of 600 meters? Visionaries like Dario Trabucco, Research Manager, Council on Tall Buildings and Urban Habitat, however, also see many opportunities for the future:

“I am sure that buildings no longer have to be designed as independent structures. When high-rise buildings are connected to one another on the upper floors, there is more redundancy in the energy and water supply.

The same applies to secondary escape and rescue routes. Given that street level is becoming increasingly crowded, congestion near the ground could be reduced by connecting buildings and communal areas in high-rise buildings. Life in skyscrapers would be made more sustainable.

I avoid the word "history" when I talk about buildings. The term evolution is simply better. "History" is the past. However, the development of high-rise buildings is not yet complete. "