Can we do the Shiva temple well?

Largest Hindu temple in Germany: everyone is God inside

Vilwanathan Krishnamurthy is building a Hindu temple in Berlin-Neukölln, the largest in Germany. Now the entrance portal is almost finished. 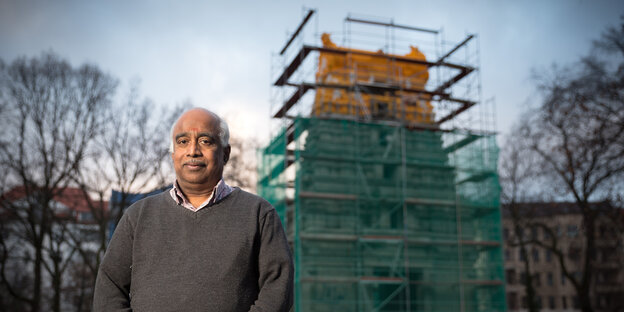 Has been building the future temple with volunteers for nine years: Vilwanathan Krishnamurthy Photo: Christian Mang

This royal tower, which has been under construction in Berlin for nine years, 17 meters high and decorated with 180 gods, so this tower, still scaffolded but already illuminated like any church of size, represents the feet of a reclining Buddha. Vilwanathan Krishnamurthy demonstrates this by stretching out his arms and bending his hands upwards as if the hands were the feet pointing toward the sky.

The tower is located near Hermannplatz, next to the amusement arcade, bowling alley and the historic “Neue Welt” concert hall. In the square behind it will one day be the largest Hindu temple in Germany and the second largest in Europe, 864 square meters in size. Only in London is there a bigger one. Krishnamurthy, the welder who grew up in South India, has forgotten the exact name of the district where it is located.

The friendly and open-minded Krishnamurthy is the founder of the temple in Berlin. Often he dreamed that he was building a temple, he says, and his eyes look for the other person's eyes, only to smile when he has found them. At one point he said to his wife: I have to found a temple. And she: “You are nuts. We're not the kind of people who do that, we don't have any money. ”He also says that building a temple is something divine, and those who do so were commissioned to do so in their previous lives. Was he a god even then? "You shouldn't think that way," he says, "everyone is God inside."

Because the dreams did not stop, he began to follow the trail anyway. That is why the almost completed Königsturm, which also houses the gate that will later lead into the temple, is now on this wasteland in Berlin. "It is still being painted in bright colors."

In addition to the tower, there is also an old sports hall on the site, but after Berlin did not become an Olympic city and no funding was received for the renovation, it was only a ramshackle tool shed. The gym is now used by Hindu believers as an interim solution for their ceremonies.

The temple, dedicated to the mighty elephant god Ganesha, is a place of purification, says Krishnamurthy. “We expect that we can burn bad energy in the temple and come out with good energies.” Bad energies, that is hate, envy, resentment, violence, arrogance - for example.

Krishnamurthy, active and carried by his faith, wants to bring everything possible into harmony on the site: cultures, religions, philosophies, architecture, ethics, morals. “The temple is supposed to help integrate Hindus in Germany,” he says. "The official language is German."

Every day the priest, the brahmin, comes to the former gym. Like Krishnamurthy, he used to be a guest worker, but then studied Hindu theology. Only the Brahmin is allowed to open the Ganesha shrine in the interim temple. In the ceremony he cleanses the shrine, calls the god, renews his strength and shares it with the believers. And he brings fire to the selected gods that are placed on a wall of the gym, including next to the most important and popular gods in Hinduism, the many-armed Shakti and the many-armed Durga - both are female - also Murga, the favorite god of Krishnamurthy. Murga embodies beauty and wisdom and he brought the Tamil language, the native language of the temple founder, into the world.

Krishnamurthy came to Berlin from Bangalore 41 years ago. Most of the time he lived in the Neukölln district, not far from where the temple is now. Somebody from South India becomes a guest worker, how come? “Because AEG had a plant there,” he answers patiently, even though he has told this story a thousand times.

We need welders in Germany, it was said. "Well, you could do it for two years," he thought. An adventure, he was 23 years old. He came with friends. "We have always been treated well until now." After two years, Master asked them if they could stay a little longer. "Well, let's get our wives now." When children come, so the thought, they want to go back again. Then children came, with him two sons. “Well, when they come to school, we'll go back.” Then the children came to school. “Well, if they go to high school, we'll go back.” Then they went to high school. "Well, now you can do your Abitur, but then we'll go back."

When the sons graduated from high school, they said to their parents: "You can go back, we will stay."

Krishnamurthy has long since stopped working in the factory, but in the initial reception of refugees at the Berlin State Office for Health and Social Affairs. At the moment, a lot of them come from Moldova. He is also involved in Berlin's integration advisory board. And he is a friend of the former SPD mayor of Neukölln, Buschkowsky, who became famous for using solid language to fuse pragmatic and sometimes enlightening ideas with populist thinking when it came to integration. Krishnamurthy succeeded in convincing this mayor that Berlin needs a Hindu temple. Buschkowsky offered him the fallow land with a ramshackle gym for 85 years on a long lease nine years ago.

Homosexuality is not a problem, and neither is intersexuality. Every god is a hermaphrodite, the heart female, the brain male.

The hall was restored with a lot of volunteer work and donations. Hindu refugees from Afghanistan are also helping. It can only be built if there is a donation, which doesn't make things any easier because building projects are subject to deadlines. But when the temple is finished, of which only the tower is standing so far, the gym is to become an intercultural, interreligious meeting place. Everything should be ready by the end of 2018, when the building permit will expire.

As now, parties and weddings should be celebrated in the hall. On one side there is a huge stage with a gold-colored canopy, which, albeit this is only symbolic, is decorated with the 33 million Hindu gods that exist in this many-gods religion. The wedding ceremonies take place under the canopy. This ensures that all gods give their blessings. Mr. Krishnamurthy, how do you distinguish 33 million gods? "Yes," he replies, "you can get confused."

Seventeen weddings, he says, have so far been celebrated in the hall, now an interim temple, "all of them interreligious". Hindu with Muslim, Christian with Hindu, other combinations, he no longer knows exactly, including his son, who is married to an Orthodox Christian from Serbia. Krishnamurthy used to publicly say that his children should marry Hindu women. When his son told him about his girlfriend, he said he should find another one. "But tell me, do you want me to be happy?" Asked the son. The father said yes. "You see: I am happy with this woman."

I learned so much in Germany, says Krishnamurthy: "Who am I to stand against love."

Everything is fate: that he came to Berlin. That he is building a temple. That he now has the interreligious in the family, the second son has a German girlfriend. The fact that so many people help with the construction of temples, around 6000 Hindus live in the city, 1.4 billion there are worldwide. And that his grandson should be born on December 24th. “We celebrate everything in the temple,” says Krishnamurthy, including Christmas. Holidays are happy days. Religion should be joy, joy is the most valuable thing that a person can pass on. “I want to leave something from our culture to my children,” he says. My grandchildren should be able to say. "My grandfather built a temple."

Every day Krishnamurthy takes part in the ceremonies, bows to Ganesha, Shakti and above all his favorite god Murga. Throughout his life he felt the closeness of gods again and again. How? He tells of a car accident in India. Eleven of them sat in the car, it was monsoon, the streets were slippery, he was driving the car, it started to slide, hit a tree. Everyone was hurt, except he and his wife. "You, you always say God, God," his wife is said to have called. "Where is your God who helps now?" Then they turned around and the residents of the nearby village had come, they drove to the hospital, gave them food, stayed with them until they were looked after.

Later, Krishnamurthy stands next to the cement mixer in the Königsturm. It smells like incense. “We're already doing ceremonies here,” he says. He points to the winter wasteland. He can already see what is not there yet: there should be a courtyard behind the tower. And the temple will stand in the middle of the courtyard. From the in-line gate, one will be able to see the Ganesha Shrine at the far end of the temple. The shrine is the head of the reclining Buddha, the temple is the belly. Who goes through the gate, goes into the body of God, the human being merges with the divine when visiting the temple.

Krishnamurthy interprets his faith in a tolerant and peaceful manner. “There are four walls to faith”, which means: a private matter. He points to the four walls in the tower. When asked about the radicalization among Hindus who are fighting against Muslims in northern India, he says: “They use Hinduism politically. For them it's about power. ”That doesn't fit his understanding of religion. “You are afraid of losing power.” But fear is bad energy.

The many gods in Hinduism, he explains, represent all possible forms of being: man, woman, fused, both in one, animal, plant. That is why it is probably never clear whether a picture of God represents a man or a woman. Euthanasia is also tolerated in Hinduism, as is artificial insemination - the gods have shown it. Homosexuality is not a problem, and neither is intersexuality. Every god is a hermaphrodite, the heart female, the brain male. “What the heart says, the brain has to hear.” If you know that, then tolerance is the top priority, he says.

Krishnamurthy later poses for the photographer between the two guardian gods, who now stand as if lost on the wasteland. But soon they will be set up next to the tower gate and are supposed to ensure that no bad energies get into the temple. The guards are bigger than him.