What plants do reverse osmosis

Water, as it is usually available in our latitudes as irrigation water, is taken from the city water network or corresponding wells in the form of groundwater. Unlike rainwater, city water and well water, as natural components, contain varying amounts of ingredients in the form of dissolved salts. 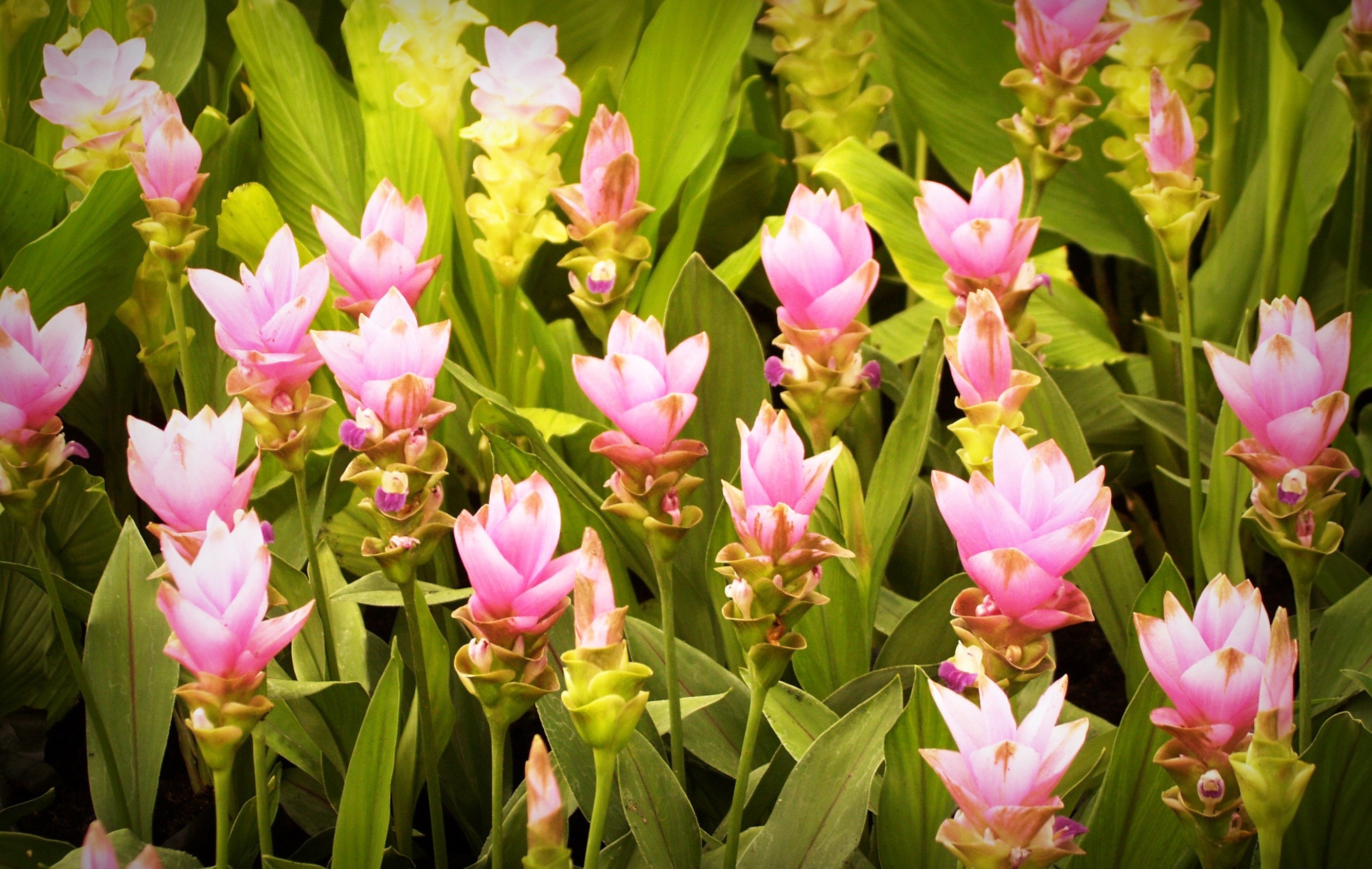 The best known are the so-called lime, i.e. dissolved calcium and magnesium ions. The amount of dissolved lime compounds in water is measured as hardness. The more calcareous the water, the higher the water hardness. Furthermore, all kinds of ions, such as chlorides, sulfates and carbonates, are dissolved in the untreated water. These also increase the total salt content. The total salt content is measured, i.e. the amount of all dissolved ions in the water by means of the conductivity. The higher the conductance, the higher the salt content. Typically we have a conductivity of approx. 500 µS / cm in city water in our latitudes. For comparison, sea water has a conductivity of approx. 55,000 µS / cm.

Dissolved ions become visible when the solvent, i.e. the water, evaporates or is evaporated. Then the salts remain in the form of a mostly annoying (and difficult to remove) crust. Example: evaporated water in a saucepan. 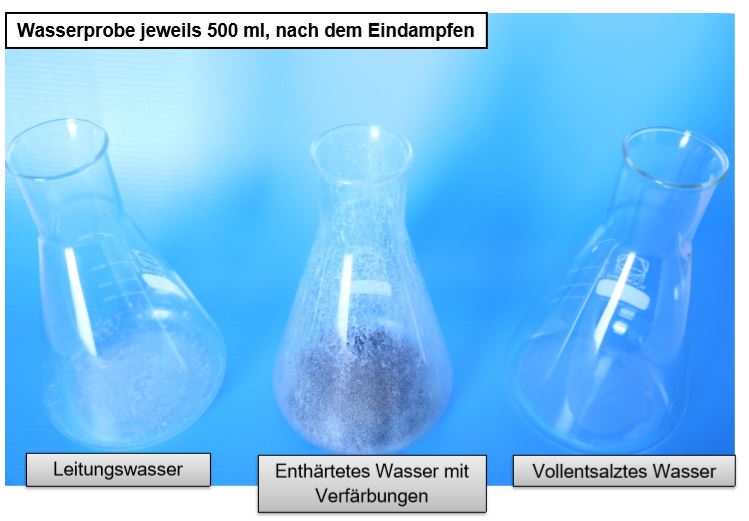 Evaporation occurs on a much larger scale in agriculture. Especially in arid, mostly hot areas, the soil is becoming increasingly saline due to intensive irrigation. Whole areas of land become unusable for agriculture. The effect is the same as in the saucepan. When the water disappears, the dissolved salts remain in the soil.

The consequences: The earth becomes more salty with every watering. This disrupts the osmotic balance of the plants. It is becoming increasingly difficult for them to absorb water from the soil. Due to the proportion of hardness, the pH value of the soil also increases, i.e. the soil becomes more and more basic (more alkaline). This hinders the absorption of iron and manganese in plants that prefer acidic soils. This phenomenon is also known as calcium chlorosis. 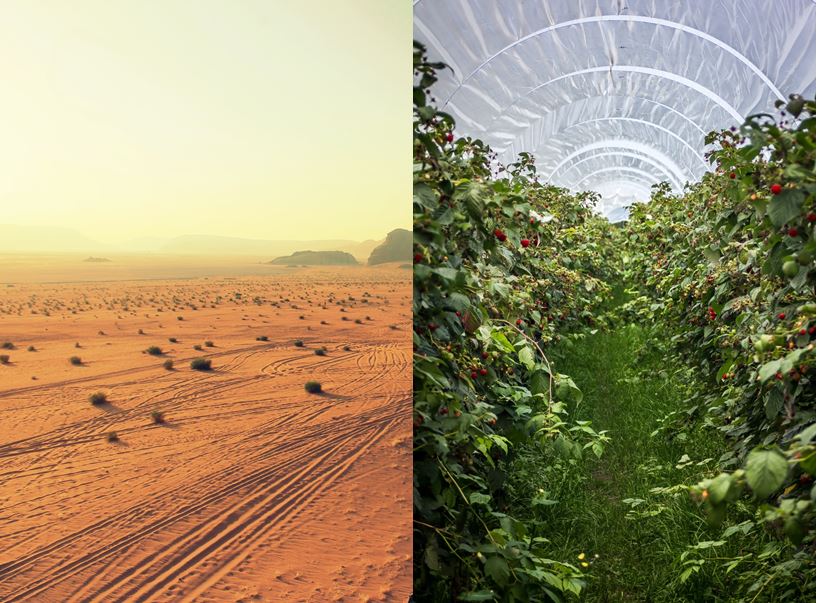 The problem described above also occurs in greenhouses, botanical gardens and ultimately in every flower pot. Orchids, citrus plants, hydrangeas, azaleas and carnivorous plants are particularly sensitive to calcified soils. If the plants are irrigated from above, there will also be stains on the leaves from salt and lime residues. 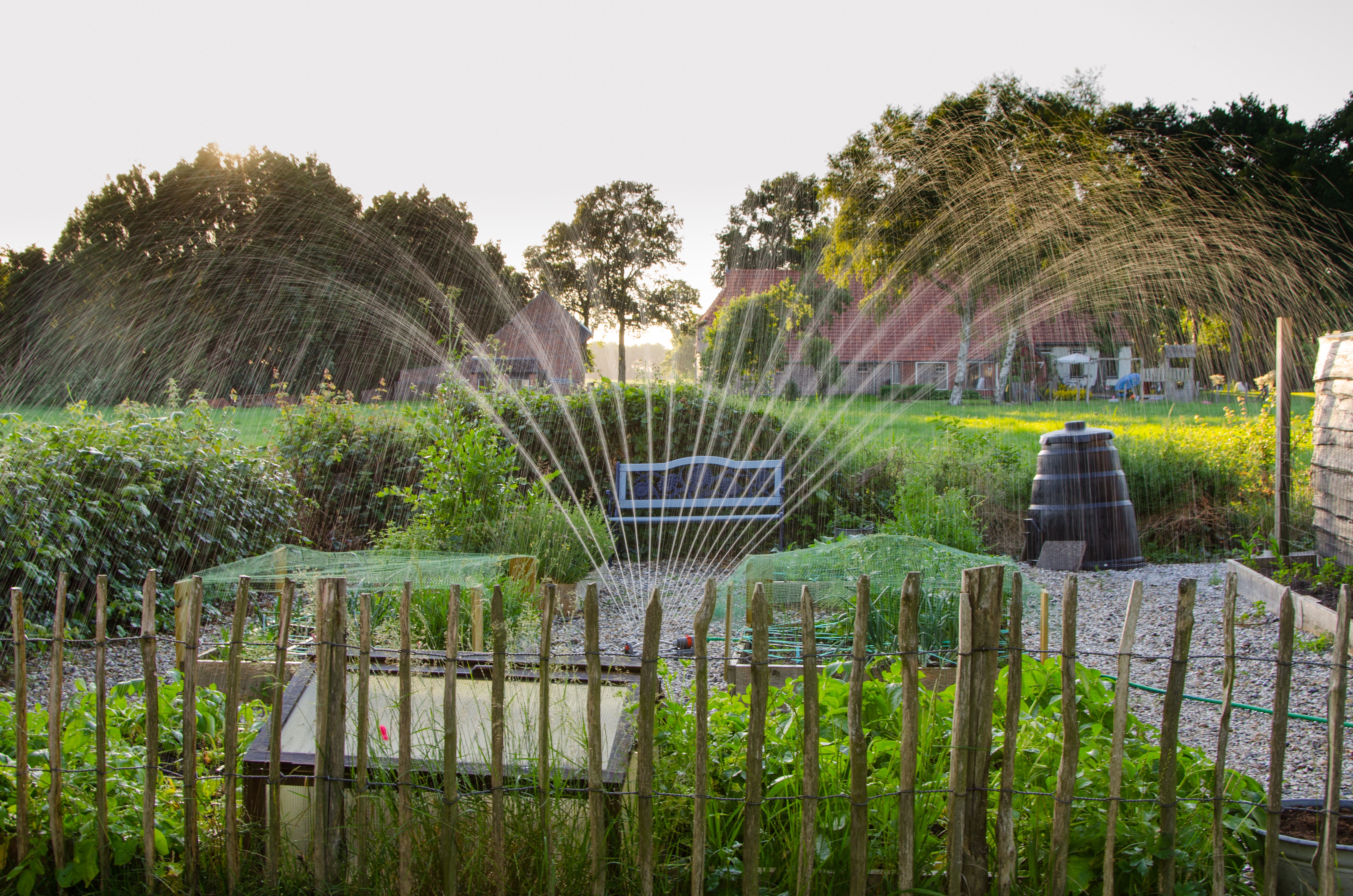 Simply softening is not sufficient. In the classic softening process using a cation exchanger and regeneration with table salt, the dissolved lime is simply exchanged for sodium. However, the total salt content does not change. Thus, if only softened water is used, there is still a risk of soil salinization and staining.

Reverse osmosis (RO) devices are available with a wide variety of capacities. Starting with small devices for direct connection to the water supply without power supply with outputs of 10 liters per hour, up to large systems with pure water quantities of more than 100,000 m³ per day. 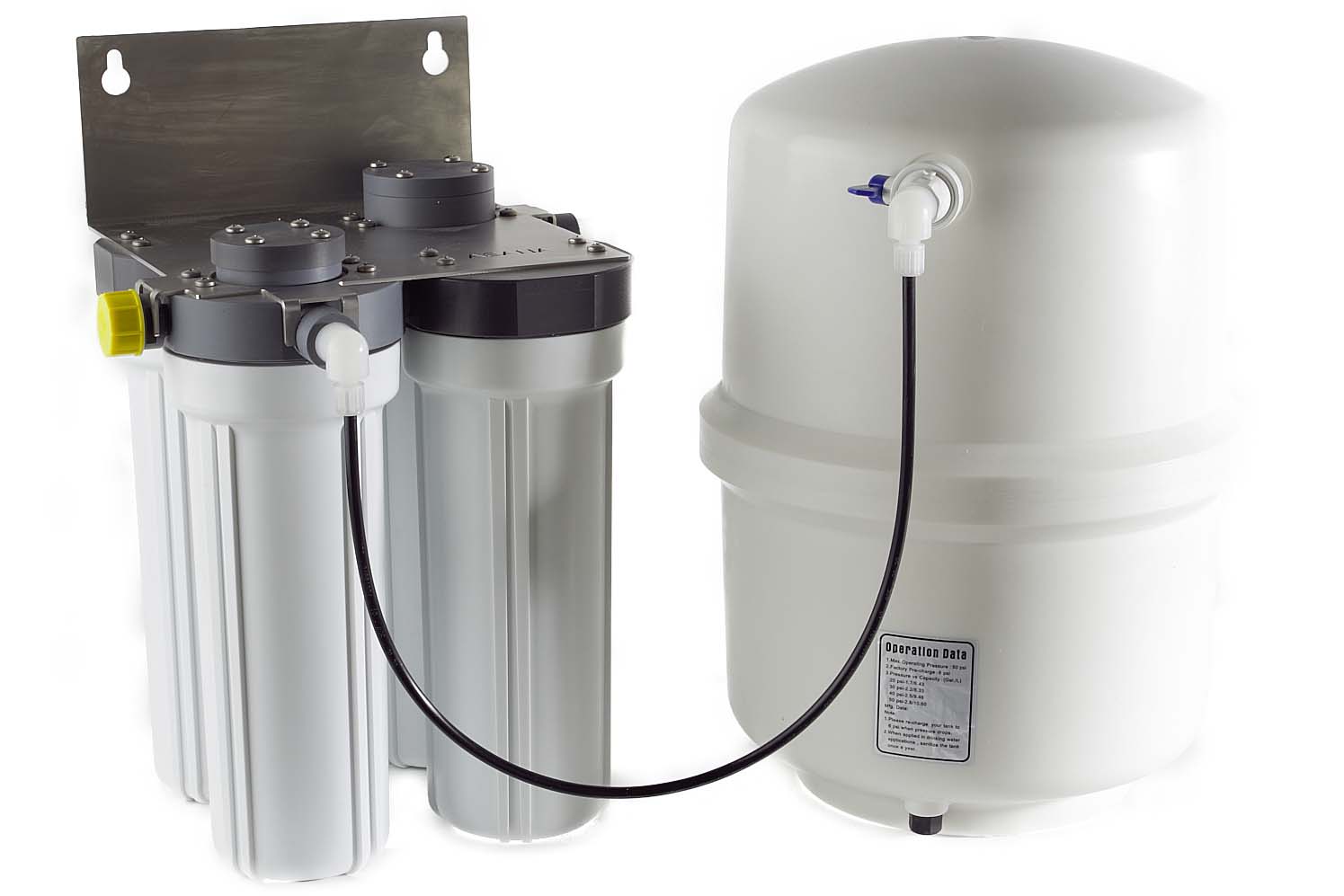 Mobile RO devices are particularly suitable for irrigation and sprinkling, which can be operated from any location and with outputs from 350 to 1200 l / h easily cover the vast majority of needs. 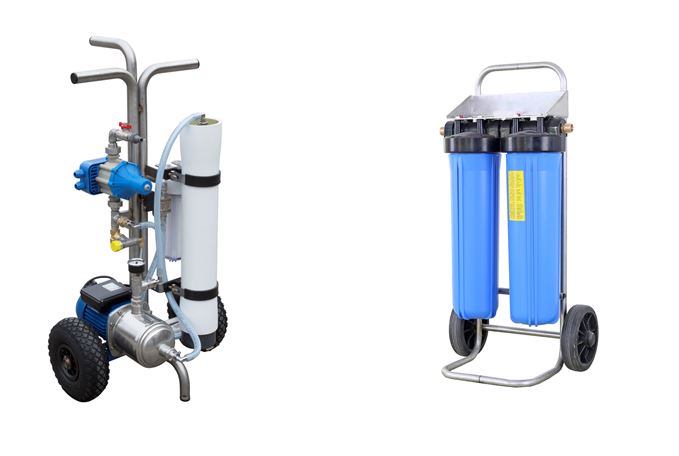 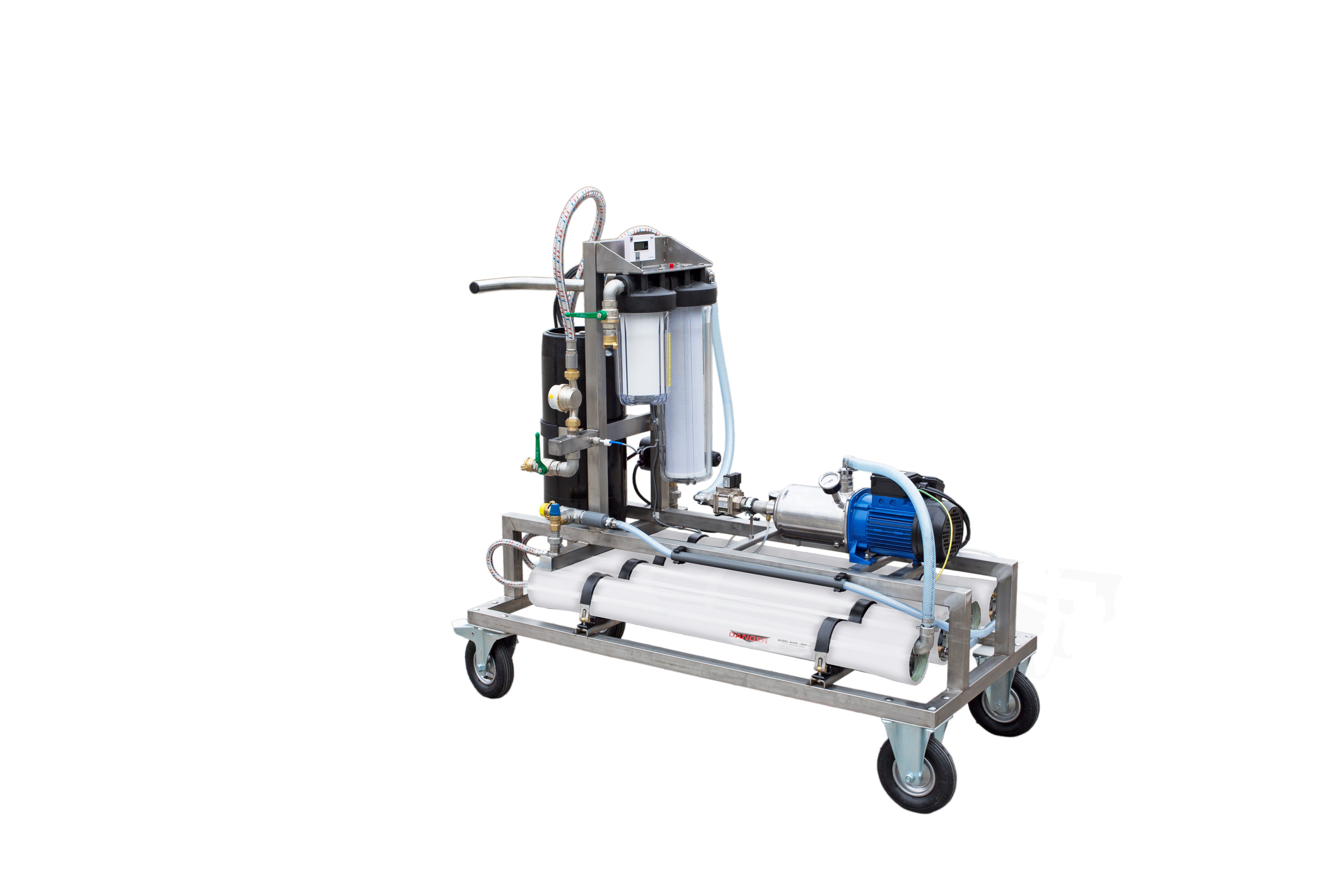