What is the full form of APE

APE 125 - it was the first APE and made its debut at fairs and exhibitions in 1947, with a cabin and the same front as the Vespa. Its 125cc 2-stroke engine was housed under the saddle and derived from the Vespa engine. The vehicle had a derailleur which was used to drive the rear wheels, swinging light metal arms, torsion springs, abrasion shock absorbers and 8-inch wheels. The "Y" shape of the body was made of sheet steel and the wooden loading area could carry a load of 200 kilograms. The vehicle was produced as a pick-up and as a panel van.

Ape C - this model was equipped with a 150cc 2-stroke engine and had a front cabin without doors and the front headlights mounted on the fender. The loading area, made entirely of metal, could carry a payload of up to 350 kilograms. The APE C model was built as a flatbed, box and passenger car (for the transport of passengers).

Ape D - this model was larger than its predecessor and had an 80 mm (3.15 in) wheelbase. The cabin of the APE D was the same one that was mounted on the APE C, but now with doors. The front headlight was now on the cab and no longer on the fender. The 2-stroke engine has a displacement of 170ccm and was still installed under the seat, but moved a little further back. The rear-wheel drive was also the same. The APE D was offered as a flatbed, panel van and passenger van.

Pentarò - the Pentarò was originally equipped with 5 wheels and derived from the APE D based on the example of semi-trailers. The Pentarò tractor was in fact equipped with a device to connect the two-wheel trailer. This full metal trailer was 2.60 meters long and could hold up to 700 kilograms of cargo. The Pentarò was produced as a flatbed and box van.

Ape MP - the APE MP had a cabin that was derived from the APE D, but had undergone major changes to offer the driver and passengers improved comfort as with car-like panel vans. The 190cc 2-stroke engine was housed on a special "sled-like" construction at the rear. The power was no longer transmitted via chains but directly to the rear wheels with half-shafts, swinging arms, rubber springs and hydraulic shock absorbers and 10 inch wheels. The newly developed chassis in the "H" design was larger than the previous APE models and was made of sheet steel. The trailer was produced in a normal version (1,500 x 1,750 mm, 59 "x 68.9") and a "long" version (1,500 x 2,000 mm 59 "x 78.74"). The APE MP had a payload of 500 kilograms and was produced as a flatbed, box, passenger car and tipper. 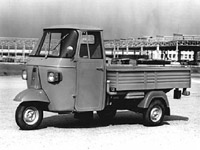 APE MPV - Developed from the Ape MP, this model improved driver comfort by using a steering wheel in place of the handlebar controls. The APE MPV is also equipped with two headlights installed on the front fairing. As with its predecessor, the metal trailer is available either as a "normal" or a "long" version, but with an increased payload of up to 600 kilograms. This model was also produced as a flatbed, box, passenger car and tipper.

APE 50 - The first vehicle from the APE range to be classified as a "moped". It was designed to replicate the success of the Vespa 50 in the two-wheeler segment in the light truck segment. The cabin of the APE 50 has no doors and the 49.8cc 2-stroke engine can transport a payload of up to 200 kilograms. It achieves the speed and other performance that the law prescribes for mopeds. The rigid chassis measures 1,200 mm x 1,250 mm (47.24 "x 49.21"). This model of the APE 50 was available as a flatbed and box van.

APE 125 - the structure of this vehicle, powered by a 125cc 2-stroke engine, was identical to the APE 50, but this model was equipped with doors on the cabin.

APE Car - a new, larger body with a larger and more comfortable cabin equipped with a steering wheel. The 220cc 2-stroke engine was still housed in the rear area on the special "slide". The APE Car was equipped with a large loading area measuring 1,500 x 2,000 mm (59 "x 78.74") and could carry a payload of up to 600 kilograms. APE Car was produced as a flatbed and box truck as well as a tipper.

APE TM - this vehicle has been completely redesigned with a cabin for greater comfort and equipped with a steering wheel that supports both left-hand and right-hand traffic. The 220cc 2-stroke engine was located directly on the chassis in the rear of the vehicle. The independent suspension was also new. Light alloy drum brakes were attached to the 12-inch wheels. The chassis and the fixed structure of the loading deck were considered new features. The loading bed was available in a "normal" version (1,500 x 1,800 mm, 59 "x 70.87") and a "long" version (1,500 x 2,000 mm 59 "x 78.74"). Flatbed and box vans as well as tippers were also produced from this.

APE Diesel - a further development of the APE Car. This new model was powered by a 5-speed 422cc 4-stroke engine, the smallest in the world with direct injection. (This drive unit had met the very strict standards for emission values.) The 12-inch wheels were equipped with drum brakes made of light metal. The APE Diesel could carry a payload of up to 700 kilograms and was produced as a flatbed and box truck as well as a tipper.

APE Car Max - born out of APE Diesel, this new model achieved the payload record of 900 kilograms. Loading and unloading has been simplified by the enlarged loading area with dimensions of 1,500 x 2,200 mm (59 "x 86.6"). The APE Max was brought out as a flatbed truck. 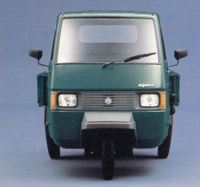 APE TM Diesel - a further development of the APE TM equipped with steering rod control and a 4-speed 422ccm 4-stroke diesel engine. The versions in which the APE TM Diesel is available are: flatbed trucks, panel vans and dump trucks.

APE Poker - the first four-wheel APE, the APE Poker, falls under the "four-wheel motorcycle" regime introduced in Italy in 1988. With a total weight of 1,420 kilograms - including the payload of 835 kilograms. The APE Poker can be driven with a normal driver's license. In 1991 a 1,300 kg version was also produced, for which only a normal motorcycle license was required. The 422cc 4-stroke petrol engine was developed from the APE Diesel unit. Available APE Poker: flatbed trucks, box trucks (loading volume 3.38 cubic meters) and dump trucks. 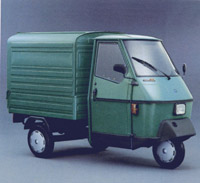 APE 50 - Piaggio presented a new version of the APE 50 with new changes to the body. Safety cushions were installed on the doors and the lower areas of the vehicle. The interior of the cabin has also been modernized and made more comfortable. The APE 50 is powered by a 49.8cc 2-stroke engine (1.8 kW at 5,600 revolutions, 4-speed gearbox, electric starter as standard equipment) and can transport a payload of up to 205 kilograms. The three versions offered are: flatbed, short flatbed and panel vans. 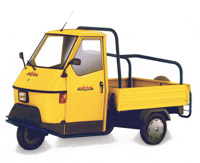 APE Cross - presented as a special series, the APE Cross is derived from the APE 50, is based on the same technical specifications and offers a number of customizable options. The target group are young people who have accepted the "Apino" as an alternative to motorized two-wheelers over the years. The APE Cross is equipped with a roll bar and has a handy and spacious transport box (with over 120 liters in the interior) attached to the rear. Further possible equipment options are: electronic immobilizer, stereo radio and loudspeakers, curtain for the rear window. The colors are youthful and bright and a clear distinction from the color palette of normal Piaggio light vans.

APE 50 Europe - derived from the APE 50, which was equipped with a simple headlight, this last model clearly signaled a halt in production. The big novelty of this particularly intensely redesigned APE 50 is the front section, which now has two headlights and flashing lights. This new version came on the market with the same technical specifications, but unusual elements were added to the "optional equipment". The 49.8cc 2-stroke engine delivers 1.8 kW at 5,600 revolutions per minute and the electric starter is part of the standard equipment. The payload is 200 kilograms and the following versions are available: flatbed, short flatbed and panel vans (apart from the APE Cross).

APE 50 Restyling - the current version of the APE 50 offers the answer to a market that is increasingly demanding more product content. The technical improvements include an automatic gasoline / oil mixer and a catalytic converter. The most notable functional improvements are side flaps made of light metal, a larger seat and improvements in the driver's cab to increase driving comfort.