You can cycle through a passage

There are a relatively large number of private roads in Norway, which are usually built by local communities. They open up remote areas that are of no interest to the general public. For their use, at least motorists and motorcyclists are required to pay a fee, which has to be deposited in a wooden box at the beginning of the road. In some cases there are also modern machines.

Private roads can be interesting for cyclists if they save detours on public roads through a cross connection. This is seldom the case, however, as private roads are often dead ends and, when the opportunity arises, the shortcut is not infrequently combined with a steep mountain traverse while the public roads go "around the outside". Since the private roads are narrow and often only gravel, there is little or no traffic and you get very close to nature as a cyclist. 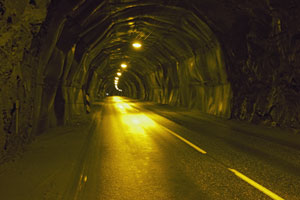 There are endless tunnels in the fjords of Norway. Due to the wealth that North Sea oil has brought to the country, many places that were previously only accessible by ferries have now been opened up via tunnels. In southwest Norway, entire mountain ranges have been riddled with holes for long-distance traffic. The main route from Bergen to Oslo, for example, runs through gigantic tunnels at Gudvangen and Flåm. The truck traffic is considerable. In our opinion, this has taken away a lot of the flair of the untouched lonely nature of the affected landscape.

For us cyclists, the kilometer-long long-distance traffic tunnels are not passable. On the one hand, they are officially closed to cyclists and, on the other hand, we cannot recommend cycling through a long tunnel with heavy traffic. Even if you drive through a tunnel "only" 7 kilometers long at a speed of 20 km / h, you will be underway for 20 minutes! This time can seem quite long, because the noise and the smell of exhaust gas are enormous in the relatively narrow two-lane tubes and, last but not least, stress and the risk of accidents for cyclists and motorists are high. Often the tunnels go uphill to the middle, so that a brisk pace cannot be maintained.

This means that because of the long long-distance traffic tunnels, some areas cannot be reached by bike at all or only by long detours or crossing steep passes.

In our opinion, the navigability of the long tunnels depends solely on the traffic. When there is no traffic, you shouldn't be put off by the prohibition signs. The police always turn a blind eye when traffic is not obstructed. For example, we drove through a 7-kilometer tunnel on the Sognefjord on a Sunday morning, despite the ban on bicycles, and only met about 10 cars during the 30-minute drive. Short tunnels with a length of 1 to 2 kilometers are hardly a problem because you can get through quickly.

In any case, a good light at the front and back of the bike is essential. There are a lot of shorter tunnels with no lighting. Even in the illuminated tunnels, drivers can see you much earlier and better with your own light. You also have to make sure that the bike lights are not covered by luggage! This happens quickly, especially with the rear light, and you don't notice it yourself.

Before driving through longer tunnels, you should put on a jacket even in warm weather. It is usually very cold in the tunnel itself.

In our tour descriptions, we have always pointed out that the tunnels are passable for cyclists.

There is now a national network of cycle paths in Norway. The cycle paths are marked with numbers and marked by brown signs with a white number on a green background. As far as possible, the routes are on low-traffic routes. You also bypass longer tunnels, which are forbidden for cyclists. However, separate lanes for cyclists are still very rare and more likely to be found within locations.

In the north of Norway, the cycle paths are hardly signposted. Since there are only a few roads there, this is usually not necessary.

There is also a large network of cycle paths in Sweden, which are also quite well signposted. However, you should not always rely on signs. Bike path is called Cykelspåret in Swedish. The logo is a white bike on a dark blue background with a white border and white lettering with the name of the bike path.

The network of cycle paths in Finland is surprisingly dense. However, you cannot rely on the signs at all. Often there is no signage or the signs are so faded that they are completely illegible and the direction of travel can only be deduced from the orientation of the sign.

In Denmark there are many long-distance cycle routes in the form of so-called national cycle routes. They are very well signposted. A white wheel on a light blue background is used as the logo. The cycle route number is shown in white text in a red square. (Next page