Do bananas have DNA

The banana genome has been deciphered

In the future, it will be easier to grow tastier and more resilient types of bananas. An international team of researchers has now deciphered and analyzed the genome of the banana Musa acuminata. The 523 million bases long genome sequence of this wild banana provides valuable insights into the development of the fruit from the wild form to the cultivation varieties known and popular today, the researchers report in the specialist journal "Nature". Above all, however, genes could now be specifically identified that made the banana varieties acutely threatened by fungal diseases and pests more resistant, say the researchers.

"Bananas are vital for the food supply in many tropical and subtropical countries," write Angélique D’Hont from the French agricultural research center CIRAD in Montpellier and her colleagues. The banana is the most popular fruit in industrialized countries. But after around 7,000 years of breeding and cultivation, many pests would have adapted to the varieties that are common today. This is an acute danger for global banana production. "Up to 50 pesticide treatments per year are necessary in large plantations against the fungal disease Black Leaf Streak Disease alone," the researchers report. A new harmful fungus is also spreading rapidly in Asia.

According to the researchers, deciphering the genome of this fruit is a crucial prerequisite for developing better-armed varieties in the future. The genetic analysis shows, among other things, that the banana has very few genes designed to protect against fungal diseases. But there are also initial indications as to which genetic makeup could better protect the plant against attacks. The researchers hope that these and future findings could now be incorporated into the breeding of more pest-resistant banana varieties. 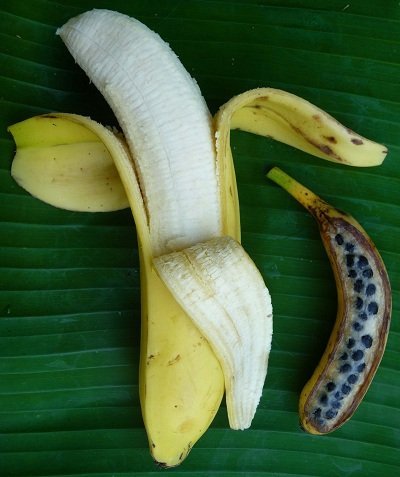 Supermarket banana next to the wild fruit © Angélique D'Hont

The new data show that the banana genome is made up of 523 million base pairs, the basic building blocks of DNA. This means that their genome is around six times smaller than the human genome, the researchers report. The analysis of individual genes and gene groups also gave indications of the evolution of the banana and its kindred, the monocot plants. In addition to grasses, cereals and maize, these include orchids, palms and numerous types of flowers. The seeds of this group of flowering plants have only one leaf system, so the sapling initially only has one leaf. 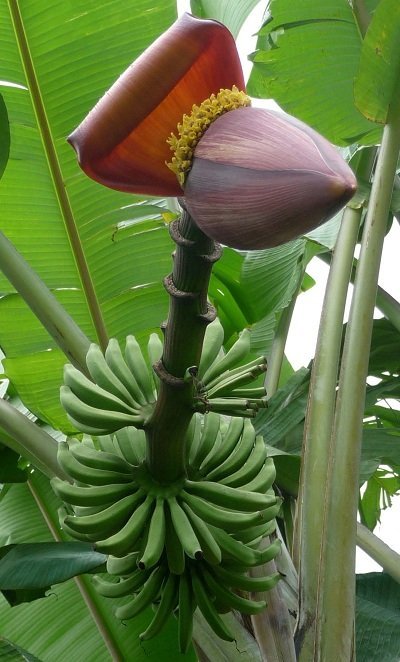 "The banana is the first non-grass monocot whose genome has been deciphered," the scientists explain. Genetic comparisons of the fruit with grass-like monocots such as wheat or maize showed that the banana must have doubled its entire genetic make-up at least three times in the course of its development. The researchers explain that this happened after the grasses were separated from the remaining monocots. The gene comparisons also revealed that the banana shares 7,674 gene groups with almost all other plant groups. (doi: 10.1038 / nature11241)