This question has preoccupied me since I was 16 and as a Christian the answer has been clear to me since then. On our travels and when observing nature, we keep seeing the ingenuity of the almighty Creator. Even 200 years after Darwin's birth and 150 years after the publication of his book "The Origin of Species", the most important questions of the theory of evolution have not been clarified; on the contrary, they have become even more insurmountable. Here is a brief overview of this topic:

The question of origin is always a matter of faith

Most natural scientists believe that all life on earth came into being in a purely natural way over millions of years without a Creator. You are methodically committed to materialism. Your research is shaped by this basic assumption.
Devout Christians, Jews and Muslims believe that one Almighty God planned and created everything. Some scientists purposefully pursue creation research in order to develop and substantiate alternative theories. Your research is shaped by the basic assumption of a creator.

Evolution as sure as the spherical shape of the earth?

The theory of evolution is mostly presented by science and the media as a fact, as sure as the spherical shape of the earth. Critics are often ridiculed and defamed. But the most important questions have not yet been conclusively answered:

-> The origin of the primordial cell is unclear
Thousands of experiments have been carried out for over 50 years with the aim of proving the spontaneous formation of the primordial cell or at least its macromolecules, so far without success. In addition, the origin of the genetic code in the cells is unknown. For comparison: Even if my computer's hard drive had been created by itself, how did the programs on it come about?

-> No evidence of macroevolution
The flexible adaptation of living beings to external environmental conditions (microevolution) through mutation and selection or breeding are well documented and can be observed in nature. Darwin has already established and documented this. However, the sum of such adaptations over many generations has never demonstrably led to a higher development of organisms (macroevolution), but only to a specialization on the same level of complexity, often combined with a depletion of the genome. Among the 250,000 fossil species found there are hardly any debatable Transitional forms. New species appear in leaps and bounds in the rock layers. There are no known mechanisms for the creation of new blueprints and no such observations in nature or in the laboratory. 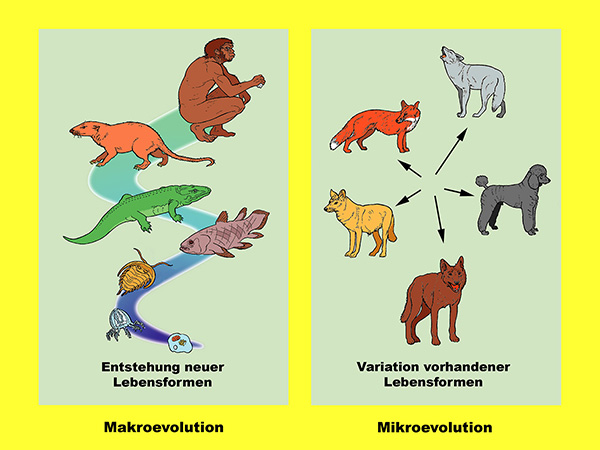 Macro and micro evolution are fundamentally different concepts. Microevolution can
we observe in nature, while there is no known macroevolution to date
Mechanisms and evidence there (Image: wort-und-wissen.de)

The creation: "Everyone according to his kind"

Creation theory says that at a certain point in time all plants and animals and man were created by a Creator. Since this unique, inexplicable process, everything has happened in accordance with the natural laws known to us. There is no need for a “stopgap god” to intervene again and again from time to time. The similarity of the blueprints of organisms and genes points to the common designer and not necessarily to a common origin. The basic type model developed by the study group Wort und Wissen in Germany is based on this point of view and corresponds to the previous findings on fossils and microevolution.

In the theory of evolution, the origin of the original cell and the sudden appearance of new ones
Life forms in the rock layers not clarified. The theory of creation is based on one
independent creation of basic types with a subsequent variation
(Picture: Creatio, daniel-verlag.de)

The duration and time of creation are unclear. The literal interpretation of the biblical creation story speaks for seven days about 10,000 years ago (short-term creationism). But the sequence of the fossil deposits and the sudden appearance of new forms of life in different layers does not currently allow a conclusive explanation for a short-term creation model, although there are many individual indications for rapid geological processes. Other creation researchers assume that the earth is very old (long-term creationism). Even if this interpretation leaves some theological questions unanswered, it is for me personally  the most logical variant at the moment.

ID researchers are looking for structures and mechanisms in biology that demonstrably could not have arisen without intelligence. However, they do not say anything about the identity of the designer. You speak z. B. of "irreducible complexity". These are structures that only work in their complete form and for which there can be no useful intermediate stages. These research results are important pieces of the puzzle for a hopefully somewhat more open and less dogmatic discussion about the original question in the future.

I believe in the Almighty Creator and not in evolution

The points mentioned show that believing Christians have no reason, for scientific reasons, to have to lean on the theory of evolution, for example by believing in theistic evolution. The key points of the theory of evolution “primordial cell” and “macroevolution” are unsolved, even if science and the media want us to believe otherwise. To classify the almighty Creator as the “God at the gap”, who always intervenes when the scientists cannot find a solution and who is said to have built his creation on a patchwork method (mutation and selection, survival of the fittest at the expense of the weaker) is for me not an option.