How is Bhutan governed

The Kingdom of Bhutan is preparing for democracy

Political parties, parliamentary elections and the separation of powers - what is taken for granted in South Asian countries such as India and Sri Lanka has yet to be learned in the Kingdom of Bhutan. The country that lies between India and the Tibet region is preparing for democracy. More precisely: the change from an absolutist monarchy to a democratic constitutional monarchy. King Jigme Singye Wangchuck has ruled for over 34 years. He is the fourth monarch in the country and the first to introduce democracy.

It is not selflessness that moved the king to take this step. Miriam Weiberg, political scientist at the University of Rostock, sees this as a late reaction to foreign policy events in the regional environment of Bhutan: India's independence, the founding of the People's Republic of China and the flight of the Dalai Lama. "It just became relatively clear that the phase of the centuries-long self-imposed isolation of Bhutan must come to an end." In addition, the king wanted to secure his position permanently and ensure peace in the country.

The preservation of Buddhist culture has long been at the fore of Bhutan's politics. In the 1950s, however, the annexation of the neighboring kingdoms of Sikkim and Tibet by India and China startled the elites - a rethink and a slow opening to the outside world began. The establishment of a national assembly and the appointment of a cabinet are milestones of this period. With the 25th anniversary of the king's throne in 1999, there was another innovation: television found its way into the living rooms of Bhutan. 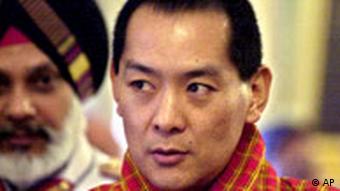 Five years ago the monarch set up a commission to draw up a constitution. It will be the basis for the first democratic election in 2008. The last draft has been available since March 2005. The constitution is to be decided in a referendum. However, a schedule is not yet available. One point of the constitution is the term of office of the king: from now on he is to abdicate at the age of 65 and cede the office to the crown prince. That will happen at the same time as the 2008 election. Thereafter, Bhutan is governed by a democratically elected people's chamber and a national council. The National Council will consist of 20 elected members and five members appointed by the king.

People loyal to the king

According to the political scientist Weiberg, the population is still skeptical about the system change. "There was a long run-up to discussions in all the districts," she says. "In those it became clear that the king wants much more democracy than the population, who would actually rather stick to the old system." In the system of slowed-down modernization that the king's father introduced in the 1960s, the population as a whole is doing very well.

Despite all the skepticism in the population, Manfred Kulessa, German honorary consul of Bhutan, believes in a positive referendum. "The people are also obedient and they have great faith in the monarch. And that's why they will probably vote in the referendum," said Kulessa. "You have to understand the skepticism. The experiences in democracy have not been so positive in all Asian countries."

95 percent are not allowed to run for office

The right to stand for election is to be severely restricted in Bhutan: only university graduates are allowed to stand for election. Kulessa does not consider this restriction, which caused great astonishment in Bhutan, to be tenable: after all, only 3,000 of the 670,000 Bhutanese university graduates are. "That will certainly be discussed further," believes the consul. "And a sensible solution will be found there."

But in addition to the right to stand as a candidate, the draft constitution contains other undemocratic elements: Even those who are married to a foreigner are not allowed to run for office. The honorary consul is certain that the last word has not yet been spoken here. Finally there is the parliament and hopefully soon there will also be parties in the country: "The most important thing is that the parties now form and become known. And of course the politicians are already in the starting blocks to found parties."