What do GamerGate advocates want

The following post is from a blogger who writes under the pseudonym Transye West and is published here with kind permission.

Dear opponents of GamerGate, I am #NichtEureMunition

I'm transgender man-to-woman and like many of us I support GamerGate. I believe that freedom of expression is more important than anything and would give up the right to gender transition and legal recognition of my new gender in order to protect this universal human right. I believe that others can insult me ​​and that I can insult them without fear of interference by the authorities and that "cyber violence", as it is described by Anti-GamerGate, does not exist. I firmly believe that opinions, regardless of the medium in which they are expressed, should never be criminalized - as long as they do not cause physical harm to others.

I've been involved with GamerGate for six or seven months now and have made incredible friends among both opponents and supporters of GamerGate and wouldn't want to change any of them. Although I had violent disagreements with representatives from both groups, I felt a connection with most of them. However, I have only felt real negativity from a group of like-minded people.

Those who called me transphobic even though I am transgender myself, those who called me “the one who helps keep trans people down” are the same people who are critical of deviant thoughts and free expression. They are the ones who follow an indisputable doctrine of social justice and others who openly speak their minds threatening doxxing and swatting. Actually, this group has a lot of respect for transgender people, two of its loudest members are transgender themselves, but this respect is only shown as long as one follows the narrative. 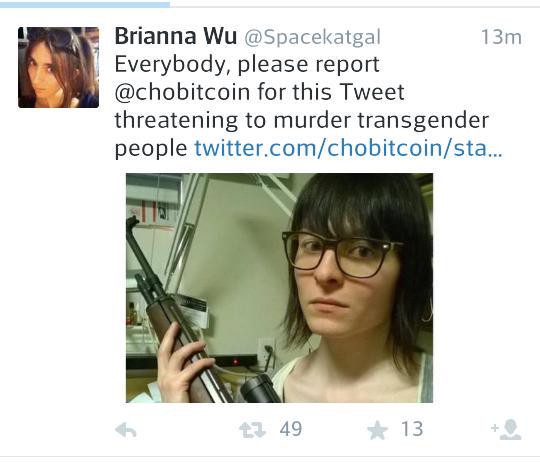 If transgender people break through the narrative, e.g. through the support of GamerGate, their position on the podium is over for them too. They go out of their way to ridicule us and devalue us by banning our twitter for not being a submissive tranny or deliberately assigning us the wrong gender for not using the "approved" list of pronouns. This lifestyle, which seems straight out of Animal Farm, attracts trans people under the guise of feminism and equality, but none of it is real: if a trans person deviates even a tiny bit from groupthink, their war reputation changes at once in: "Only a dead transgender person is a good transgender person". 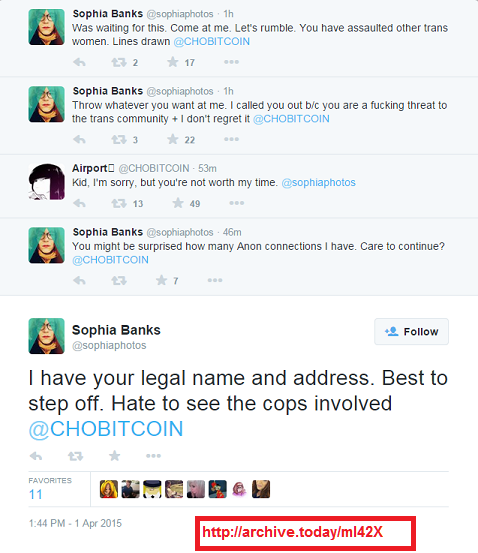 Most of the attacks on me relate to my lax use of the word tranny, which I regularly use to describe myself. I've always called myself a “tranny” in the same way that lesbians call themselves “dykes” or gays call themselves “queer”, a humorous and playful way of dealing with a term that has negative overtones is seen by some as a swear word. I don't use the word “tranny” out of a senseless feeling of being regained, but because it's good for me and because it gives others the opportunity to connect with me through humor. I believe that words are completely dependent on the context of the sentence in which they stand, on the speaker himself and that those who believe that words can be recaptured simply postulate that a white, heterosexual, cis-gender devil rules their dictionary, which is a pretty ridiculous theory.

The website feministing.com cited tweets from me in their article on the "Samus Atrans" controversy as evidence of transphobia. This controversy was sparked by Brianna Wu and Ellen McGrody, two transgender women who wrote an article for the infamous website themarysue.com. The article referred to GamerGate supporters as "white dudebros" and called my Twitter conversations with @remmarssa, where I asked why there was a lack of Christian role models for transgender people, "deeply transphobic". I criticized both feministing.com and the author on Twitter and shortly thereafter the article was withdrawn. When asked about this, Executive Director Jos Truitt informed me that the article in question had been withdrawn because it had outed a trans person, in this case Brianna Wu. Wu has never publicly confirmed that she is a transgender woman.

I know that Tanya Cohen (the author of the article) has a cover identity for the recently arrested internet troll Joshua Goldberg and the feministing article is practically irrelevant, but I still have a problem with feministing.com using the article in the Belief has published that it is about the truth, because in this way they have labeled me as transphobic. 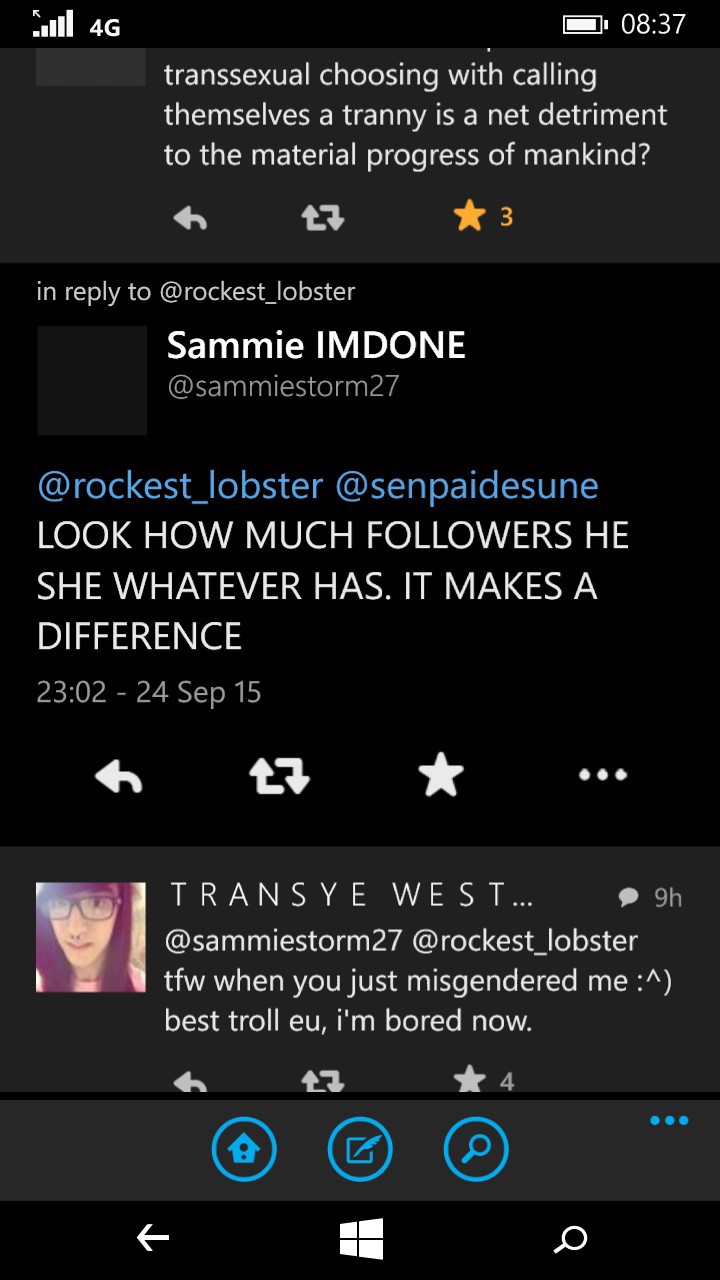 GamerGate's opponents have also tried to challenge my identity as a trans person by calling me the wrong gender or calling me "He, She, whatever". In response, I posted copies of letters on Twitter confirming my status as a candidate on the waiting list for hormone replacement therapy to be given to an NHS gender clinic from April 2016. These letters are from January 2015, two to three months before I had anything to do with GamerGate supporters or opponents. I would like to emphasize that my chosen gender and the associated pronouns have never been questioned or disregarded by a supporter of the hashtag in the six to seven months in which I have dealt with GamerGate. 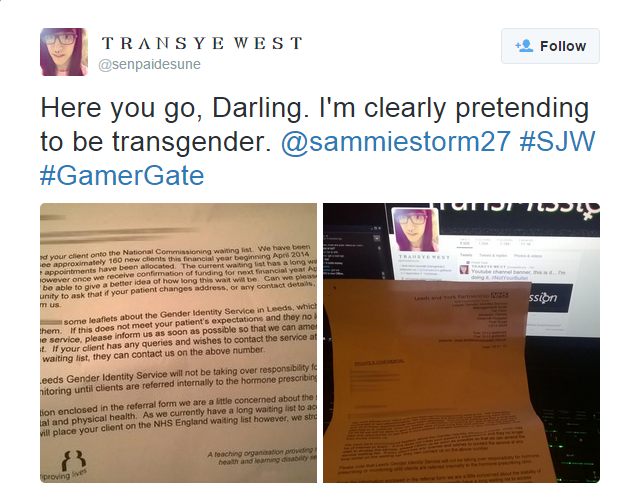 I believe that freedom of expression and speech is paramount and that my own rights as a transgender person are secondary. I would give up the right to gender transition, legally change my name or gender, and the right to marry in order to protect those rights for every single person and medium available. For example, I accept that not everyone will agree with my chosen pronouns or the way I speak about my identity. These people have a right to their own opinion, just like I have the right not to share their opinion without fear of persecution. 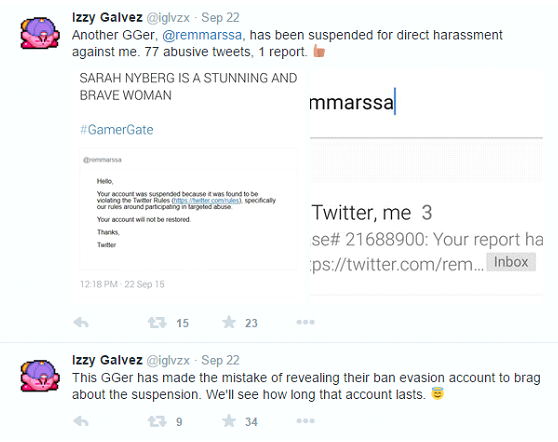 In the early days of #GamerGate, the hashtag #NotYourShield was popular, it arose from a discussion on the / v / board on 4Chan and was a response to anti-GamerGate's claim that they were defending the rights of women and minorities - as long as they did subordinated themselves to the narrative. I propose to show the world the repulsive hatred that GamerGate supporters are regularly exposed to by their opponents. These opponents use minorities not only as a shield to ward off our criticism, but also as a weapon to attack our freedom. Sexuality, gender, religion and skin color do not matter, because we are #NichtEureMunition, Anti-GamerGate!