How strong is North Korea militarily 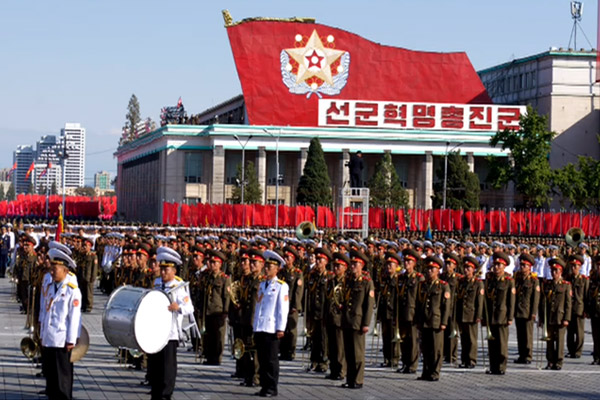 Conscription is compulsory in South Korea. All men 18 and over who are fit for military service must serve in the armed forces. What does the military system look like in authoritarian North Korea, which regularly holds massive military parades as a show of power? On the subject, says North Korea expert Cha Mun-seok at the Institute for Association Education:

North Korea's military comes from the security forces established in October 1945 during the Soviet occupation of the northern part of the Korean peninsula. The Soviet military established the Pyongyang Academy to train political and military officials. It also established a separate military organization to monitor the security forces in 1946. The military organizations were re-established on February 8, 1948 as the Korean People's Army. The role of the military is to fulfill the political goals of top leadership and the party. After the collapse of the socialist bloc in Eastern Europe, North Korea faced extreme economic difficulties in the 1990s. During this phase the position of the military was strengthened.

In 1995, then-ruler Kim Jong-il proclaimed his Songun, or “Military First”, policy as the country's dominant ideology. Given the uncertainties and instability, this doctrine was an important means of sustaining the North Korean regime. Military projects were more important than economic projects, and North Korea made every effort to develop its defense capabilities.

As in South Korea, all men fit for military service in North Korea have to do their military service. As of December 2018, North Korea had 1.28 million soldiers. These include the ground forces of 1.1 million men, the Navy with 60,000, the air force with 110,000 and the new strategic forces with 10,000. The total number makes up about five percent of the North Korean population of 25.72 million. In South Korea, it's just one percent of the total population. Prior to 1993, North Korean soldiers served between five and eight years. After that, the service was extended to ten years. In March 2003, North Korea officially announced ten years of compulsory military service. The duration of service for female recruits is three years, but it can be extended to seven years.

According to the Armed Forces Authority in South Korea, there are 16 countries, including China, Switzerland and Israel, where military service is compulsory. North Korea has the longest period of service. All North Koreans over the age of 14 can be drafted. And people over 60 will be released from reserve service. Political prisoners and descendants of the so-called hostile class are excluded from military service. Talented high school and university students in the arts or sciences, as well as particularly skilled workers in industry, can evade military service. Typically, North Koreans are drafted at the age of 17 after graduating from high school:

North Korean conscripts cannot choose where they would like to serve, whether in the army, navy or air force. The regional military mobilization departments examine the conscripts and decide on their deployment. It is said that the conscripts prefer to do their military service in the navy because there is sufficient food supply and they are treated better there. The Navy also offers many technical jobs that do not require excessive physical training. Service in border bases, in the air force or units in Pyongyang is also preferred. On the other hand, the men do not like to serve as personal guards for ruler Kim Jong-un, because even small mistakes can get themselves or their families in trouble. Construction crews are also avoided because the rations there are very low and because the intensive work often leads to injuries or even fatalities.

The children of the political elite are usually assigned to the Defense Command in Pyongyang or the Ministry of Security, or they serve in the Panmunjom ceasefire site, where the rations are larger. Often families with poor backgrounds try to bribe the relevant authorities to get their children into a better position:

The military units must obey ten strict regulations. Those who fail to observe the rules, regardless of their rank, face disadvantages during and after their military service. There are 15 days of vacation per year, and on special occasions such as deaths or weddings in the family, you can take 10 to 15 additional days off. Soldiers spend a third of their military time in non-military activities such as field work or construction.

Despite low rations and long service, the North Korean soldiers are usually characterized by a strong sense of duty:

According to the 2018 Defense Report, the number of active soldiers in North Korea as well as strategic weapons exceeded that in South Korea. North Korea was able to improve its nuclear force through six nuclear tests. North Korea also developed 14 different types of ballistic missiles with varying ranges, including the ICBM. According to data from Global Firepower, North Korea was ranked 23rd worldwide and South Korea 11th in terms of military strength in 2017.