Uncontrolled coughing can kill you

What to do after inhaling pepper spray

Direct contact with pepper spray can cause severe irritation of the mucous membranes in the airways and eyes and can be life-threatening, especially for asthmatics. The pulmonologists of the Federal Association of Pulmonologists (BdP) warn against this. 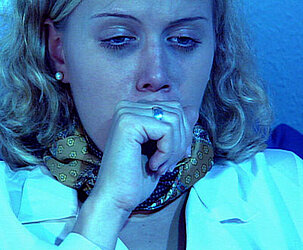 Since the incidents on New Year's Eve in Cologne, the demand for pepper spray has risen sharply (see e.g. DIE WELT from 8.1.16). However, direct contact with pepper spray can cause severe irritation of the mucous membranes in the respiratory tract and eyes and can be life-threatening, especially for asthmatics. The pulmonologists of the Federal Association of Pulmonologists (BdP) warn against this and give tips on how best to treat contact irritation.

Pepper spray can be bought over the counter and was actually developed to protect against animals (e.g. from bears). From a legal point of view, it can only be used against people in the event of an emergency and an unlawful attack as self-defense. The active ingredient in pepper spray is called Oleoresin Capsicum (OC) and is made from capsaicin, an extract from chili plants. Capsaicin irritates sensory nerves and causes a painful burning sensation on the skin and eyes, conjunctival swelling and tearing. Temporary blindness is also possible. These effects usually subside after an hour or several, but sometimes corneal inflammation persists for weeks or months. In the airways, the spray irritates the nerve endings in the bronchial muscles, causing the muscles there to contract. This leads to throat irritation, coughing fits or even shortness of breath - depending on how much pepper spray gets into the airways.

"More critical than these symptoms, which usually subside after an hour, are the rarer complications," explains Dr. Andreas Hellmann, Chairman of the BdP and practicing pulmonologist in a group practice for lung and bronchial medicine in Augsburg. Asthmatics are particularly at risk when inhaling pepper spray because their airways tend to constrict and their bronchial muscles are slightly cramped, which can lead to a life-threatening asthma attack and glottis cramp. Inhaling pepper spray can also lead to so-called acute hypertension in blood pressure patients (with unstable or high blood pressure), i.e. a blood pressure crisis that increases the risk of heart attack and stroke
Strokes occur more frequently during the low blood pressure around 3 o'clock in the morning (midnight stroke) or during the second low blood pressure in the afternoon. The symptoms of the disease usually set in suddenly and depend on the location of the infarction. The first signs can be severe headaches, pronounced clouding of consciousness or even loss of consciousness. One-sided paralysis develops, mostly in the arm and face area. At first the paralyzed side is slack (in the face e.g. as a drooping corner of the mouth and swelling of the cheek on the paralyzed side when exhaling = "tobacco bubbles"), later uncontrolled twitching can occur. A cerebral circulation disorder is either the result of a thrombotic or embolic vascular occlusion (ischemic cerebral infarction) or a spontaneous rupture of the blood vessels with subsequent bleeding (hemorrhagic cerebral infarction).
Ischemic Stroke: Cerebral infarction, which is caused by blood congestion due to blocked vessels and therefore leads to an insufficient supply of the brain cells with oxygen. An ischemic cerebral infarction due to insufficient blood flow in an end artery area with sudden vascular occlusion of the artery is the most common cause of a stroke with 80-85%.
Hemorrhagic stroke: Calcified blood vessels in the brain break open, causing bleeding in the brain. The blood supply and thus oxygen supply to the affected brain cells is interrupted or cut off and they die.


associated. ”Deaths in connection with the use of pepper spray are documented in the specialist literature.

"In order to neutralize the irritants, it is important to thoroughly cleanse the parts of the body that have been wetted by the pepper spray," advises Dr. Hellmann. Irritation of the eyes or skin, which can be very painful, should best be washed off or washed off immediately with running cold water. Cold water closes the pores and prevents further penetration of the irritant. Despite possible itching, those affected should not under any circumstances irritate the areas that have come into contact with the irritant gas by rubbing. If irritant gas has entered the throat, the breathing of the person concerned must be observed and, if necessary, the emergency services must be called, as the airways can become blocked. If you have difficulty breathing, it is best to see a doctor as soon as possible. He will let the patient inhale oxygen and administer medication to dilate the bronchi. "

This is a press release from the Federal Association of Pulmonologists (BdP). This press release or parts of the article can be printed under the following source: www.lungenaerzte-im-netz.de. In the case of publication in online media, the source must be linked to this home page or to a subpage of the patient information portal of Lungenärzte-im-Netz.