Mumbai is a district

A whopping thirty-four percent of Indian income tax is generated in Bombay. More than ninety percent of the Indian stock market runs on the National Stock Exchange and the Bombay Stock Exchange. The largest banks, the most important financial service providers, the leading companies have their headquarters in Bombay - and India, for its part, has grown into a powerful international economy in recent years. The atmosphere in the city is great, what does the world cost? 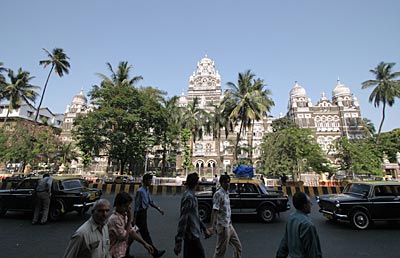 In the “Bar Wink” trend spot, the queue is long to sip a ginger and mint martini outside in the well-chilled lounge for the price of a real meal. I have an appointment with manager Vishal Singh and so give myself the queue. “Before we had a nice classic bar with a library and muted music. But too boring for today's audience, ”says Singh with the rhythmic beats that the English house DJ chases into the atmosphere,“ For the renovation, we took up traditional Indian building concepts and transformed them into stylish elements. We have stocked up our bar with the largest selection of vodka in Bombay and we serve fresh sushi as snacks ”. From ten o'clock in the evening, the wink begins to hopelessly overcrowded, the hip crowd shows itself uncompromisingly in western outfits. A drink, an appetizer here is the starting signal for the legendary Bombay nightlife, which later reaches its climax in the lounges of the five-star hotels. For example in the noble Enigma in the luxurious JW Marriott Hotel, where the smart people pull up in their limousines. Kiss, kiss. 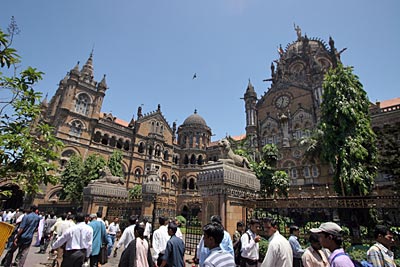 Viewed by day, designer clothing has disappeared from the cityscape. No more strapless tops, no more mini skirts, no more see-through men's shirts. Instead, brightly colored saris and classic suits, hundreds of which weighed in on me. My destination is Victoria Station, the magnificent neo-Gothic building at the entrance to downtown - it's early morning and swimming against the current is almost impossible. Shilpa Shah, the city guide who accompanies me, skilfully dodges the crowds. She is used to it: “Bombay is a city of commuters. Six million people from the suburbs take the train to work every day. The trains run every 45 seconds. Their normal capacity is 1500 people, in rush hour there are up to 5000 passengers per trip ”. Bombay - which is officially called Mumbai today, but nobody cares - is a huge city with an estimated 18 million inhabitants and an extremely modest infrastructure, Shilpa: “The streets are always hopelessly congested and there are only a few train lines. Many people need two hours to get to work - and do the same thing back in the evening ”. Finding an apartment in the busy city center is hopeless for many, with real estate prices already approaching the level of Tokyo's best locations. 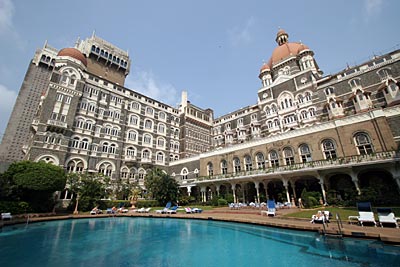 A good part of the million-strong crowd flows into the neo-Gothic heritage area, which is bordered by the Victoria Terminus in the north and the Taj Mahal Hotel in the south. Ironically, this landmark of colonial Bombay was not built by the English at all but by Mr Tata, who was annoyed that as an Indian he was not allowed to enter British hotels. He then built a hotel that overshadowed everything else in pomp and which is now considered the Grand Dame of Bombay. Between these two endpoints there are magnificent facades such as those of the old university, the Prince of Wales Museum or the Sassoon Library. It is the colonial south-east corner of Bombay, the tourist heart of the city and at the same time its financial center. In the area of ​​the former fort, where the Stockexchange rises into the sky as a solitary cloud crater, India's financial fortunes are directed. Of course, there is no trace of modern offices. "Practically the entire district is under monument protection and the laws are strict," explains Shilpa, explaining the lack of glass-mirrored high-rise buildings. "The old buildings can only be renovated carefully and there is no space for new ones". So this is Wall Street of India? I would have imagined it to be different, not just architecturally. Somehow, in the shade of multiple torn houses, on the pavement pavement with holes in the street, hooted by wild taxi drivers, it is difficult to understand the standard phrase of the Bombayites: “If you compare Bombay, then with cities like New York or Tokyo”. 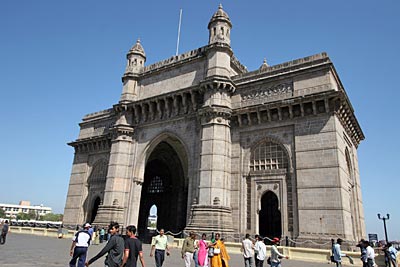 Sure, you can snack on award-winning Levantine mezzes in the Taj's cool rooftop restaurant with a view of the Gateway of India and the stock exchange, or nibble on a leafy salad with barrel-aged balsamic vinegar in the indigo in the alley behind it. You can spend an average annual salary on Indian haute couture clothing at the Courtyard and hang out to lounge music under the stars in the Dome on Marine Drive. Not a week goes by without a new spot being declared a must-be. In these places, Bombay is as sophisticated and contemporary as any other world-class city. But as soon as you leave these protected spaces, you are in the middle of the Indian street chaos, seamlessly. The chic and trendy Bombay is always just a single spot in complete madness. 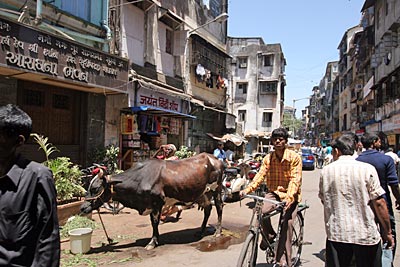 In the downtown financial district

The people here don't even notice it anymore, they tend to be selective. Rashmi Hegde moved here from Bangalore two years ago: “When I arrived, I thought, help, where am I? Here people sleep on the sidewalks, we didn't have that for example. Or this incredible mess in the streets and alleys. The noise. The traffic. ”Today Rashmi sees things calmly, like a real local:“ The people who sleep here by the roadside come from the country to try their luck. And guess what: Bombay is the city of opportunity, everyone gets their chance. Give us a few more years for the rest, the city has developed so rapidly, far too quickly for the infrastructure to keep up ”. She doesn't regret leaving her hometown: “Bombay is so exciting, so full of opportunities, so safe. It's also incredibly liberal here - because Bombay is so cosmopolitan ”. This is also one of those standard sentences that I keep hearing and that I first have to understand because I practically do not see any foreigners: by cosmopolitan we mean here that Indians from all parts of the country live in Bombay, foreigners are not in this statement included. A billion Indians is indeed a cosmos of its own. 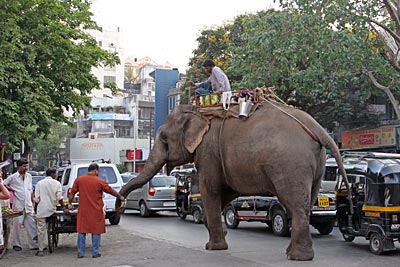 An overburdened infrastructure, horrific rents - the first offices have already moved to the more northerly parts of the city, especially to Bandra, where the sidewalks have to be paved. For the future, they are thinking about an ultra-modern satellite city in the north of the city, based on the Shanghai model of Pudong. The economic heart is still beating as usual in southern Bombay, where the seven islands that originally made up the city twist into a narrow index finger. The financial world gathers around the fort, back to back with it lies the Nariman business district, which opens up to the Arabian Sea. The English still saw the sea where the skyscrapers were, Nariman, as it stands today, was only heaped up after independence. What the district lacks in old glory, it scores with its location at the very end of the Marine Drive, which merges into Chowpatty Beach and Malabar Hill on the other side. The entire coastline is drawn by a six-kilometer-long, perfectly shaped crescent moon, Nariman on one end and the villa district of Malabar Hill on the other end opposite each other. 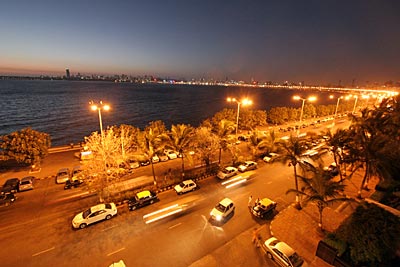 What the Taj is to the Heritage Area, the Oberoi is to Nariman. It was opened in 1986 as one of the first atrium hotels in the country and is still the first business hotel on the site to this day. Like Nariman itself, the Oberoi has less of an old charm than its fantastic location: I sit in the Bayview Bar and watch the flickering lights of the promenade and the Art Deco houses behind it. The lanterns that line the promenade along the sea sparkle like a necklace and in fact this coastal arch has been given the name Queen’s Necklace. It's the most beautiful view of Bombay ever. At dusk, the bar fills with business people who want to enjoy the evening atmosphere in peace and cool after the hot chaos of the city. I'd rather go outside myself. Meanwhile I am also practiced in selective perception, I let the taxi drivers honk, stumble over three holes in the pavement and sit down on the little wall by the sea between the colorfully dressed families, lovers and teenagers. Why compare Bombay with other cities? That doesn't work anyway, the city is just too Indian - and there is far too much gray in this world anyway.

The official website of the Maharasthra Tourist Board, the state in which Bombay is located: www.maharashtratourism.gov.in