Bollywood films are popular in Pakistan. The country's cinemas like to show the strips from neighboring India. Nevertheless, the big cinemas are now reacting in Lahore, Karachi and Islamabad. Despite expected financial losses, they are banning Bollywood cinema from their movie theaters - as an act of solidarity with the Pakistani soldiers, reported the BBC.

This article is older than a year.

This ban should at least last until the situation eases again. The newly flared up Kashmir conflict with India is thus spreading to the cultural scene. The Indian Motion Picture Producers Association had already banned Pakistani actors from appearing in Bollywood films on Thursday. At least one nationalist politician ordered the deportation of the actors, reported the BBC.

"Dangerous moment for the region"

Tensions between the two countries had risen sharply two weeks ago following a deadly attack by rebels on an Indian military camp in Uri, Kashmir, which left 18 dead. Pakistan's UN Ambassador Maleeha Lodhi spoke of a “dangerous moment for the region” at a meeting with UN Secretary General Ban Ki-moon on Friday. She asked the UN Secretary General for "decisive intervention" to defuse the situation. 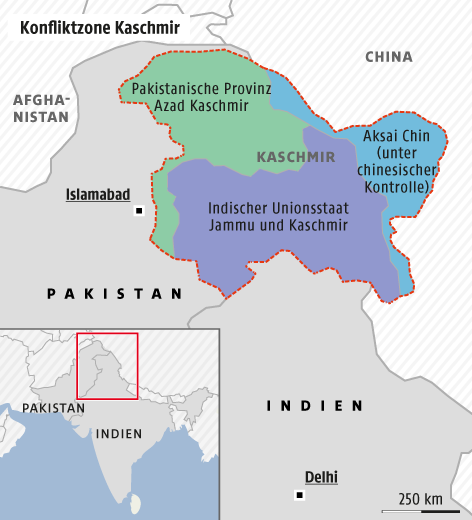 Ban agreed to take on the role of mediator in the dispute over the Indian-Pakistani border region - if that was accepted by both sides. He called on the parties to the conflict to exercise restraint and “take immediate measures to de-escalate the situation”.

India had responded to the attack on the military base and attacked several rebel positions on the Pakistani side of the demarcation line. In the border region there are repeated exchanges of fire, such as on Saturday. However, the use of ground troops on the enemy territory is rare. It was also the first time in years that India officially admitted the use of ground troops. India spoke of a "surgical blow".

On Saturday, according to the army, Pakistani soldiers reacted to a "baseless" shelling from the Indian side. According to an Indian official, the shelling came from the Pakistani side. On the political side there is a hail of mutual accusations. India blamed Islamabad for the attack and Prime Minister Narendra Modi accused Pakistan of "exporting terrorism to every corner". Pakistan's Prime Minister Nawaz Sharif, on the other hand, described the Indian military operation as "open aggression".

In any case, after the military operation on Pakistani territory, India reacted with precautionary measures. For fear of retaliatory attacks, several villages were evacuated up to a distance of ten kilometers from the border. According to police, 1,500 villagers were brought to safety in the state of Jammu and Kashmir alone. 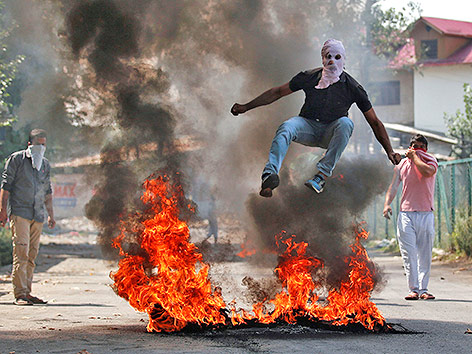 An Indian protests against the renewed violence in Kashmir

The new conflict could also have an impact on the Indus Water Agreement, which regulates the use of the Indus River and its tributaries between the two countries. After the attack on the military camp, India threatened to cut the 56-year-old agreement. "Blood and water cannot flow together," said Modi.

India does not want to terminate the agreement, but wants to suspend dialogue with Pakistan and maximize its water abstraction. Part of the deal is that India does not cut off downstream Pakistan from its use. Shortly after the threat, the Indian government canceled its participation in the November summit of the South Asian SAARC countries in Pakistan.

Fight for a divided mountain region

The unrest in the region has intensified for weeks. Clashes have been regular in Kashmir since the killing of a separatist leader by Indian security forces in July. More than 80 people were killed. The mountain region, which is predominantly inhabited by Muslims, has been divided between India and Pakistan since a war in 1947, but is still fully claimed by both states to this day.

An armistice line drawn in 1948 is still the common border that is not officially recognized by either side. A small part was also ceded by Pakistan to China. A second war for the region began in 1965. The dispute over Kashmir has shaped relations between India and Pakistan to this day.

Since 1989, several rebel groups have been fighting, partly for the independence of Kashmir, partly for the annexation to Pakistan. Almost 70,000 people are said to have died so far. India's army and police, which are present in the high mountain valley with hundreds of thousands of men, act with great severity against the insurgents, violence and counter-violence occur again and again.